"Lucid Air Grand Touring Performance answers the strong demand we continue to see for higher-performance versions of the ," said , CEO and CTO, . "The remarkable speed with which we are able to conceive and bring this model to market is possible only because of Lucid's high degree of vertical integration and in-house production of our proprietary EV powertrain and battery pack technology."

Customer Deliveries Have Already Commenced for Grand Touring
The retail launch of the Lucid Air Grand Touring model range signifies a major milestone in Lucid's growth, as it is the first production series to be introduced following the sold-out Lucid Air Dream Edition, limited to 520 units.

"Lucid Air Grand Touring epitomizes the promise of the Lucid brand – a triumvirate of industry-leading range and efficiency, stellar driving dynamics, and luxurious interior space," said , CEO and CTO, . "This unparalleled fusion of attributes is the product of Lucid's groundbreaking in-house technology, exemplified by our miniaturized drive units with unrivaled power density and race-proven 900V+ battery and power architecture."

Standard equipment for both models includes:

Taking cues from the solar noon sunshine in , this beautiful contrast of light and dark features Nappa Full-Grain Leather in and Ceramic with North American Walnut trim and Alcantara inserts.

Tahoe
Drawing on the dramatic hues of gold and orange as the sun sets behind the lake and mountains of Tahoe, this interior features Nappa Full-Grain and Premium Natural Grain Leather in and Saddle with Carbon Oak Trim.

Inspired by the rich backdrop of the dark desert night, features Nappa full-grain and premium natural grain leather in and Graphite with Carbon Oak trim.

About
Lucid's mission is to inspire the adoption of sustainable energy by creating advanced technologies and the most captivating luxury electric vehicles centered around the human experience. The company's first car, , is a state-of-the-art luxury sedan with a -inspired design that features luxurious full-size interior space in a mid-size exterior footprint. Underpinned by race-proven battery technology and proprietary powertrains developed entirely in-house, was named the 2022 MotorTrend Car of the Year®. The Lucid Air Dream Edition features an official EPA estimated 520 miles of range or 1,111 horsepower. Customer deliveries of , which is produced at Lucid's new factory in , are underway.

Trademarks
This communication contains trademarks, service marks, trade names and copyrights of Lucid Group, Inc. and its subsidiaries (the "Company") and other companies, which are the property of their respective owners. 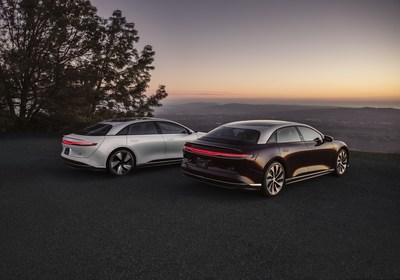