'In the Air and Beyond – A Lucid Launch Event' to highlight new models that round out the full Air lineup, latest developments for Air Sapphire, and Lucid's reimagining of the luxury SUV segment

, /PRNewswire/ -- (NASDAQ: LCID), setting new standards with the longest-range, fastest-charging electric car on the market with the award-winning , today announced that Lucid Air Pure and Air Touring will be unveiled during an online global launch event entitled In the Air and Beyond – A Lucid Launch Event, taking place on at /, ahead of the first Air Touring delivery taking place that same evening at the company's . In addition, the online event will also feature exciting announcements about the Lucid business and future models, including the Project Gravity SUV that reimagines the luxury SUV with the same in-house developed technology that underpins the groundbreaking sedan. 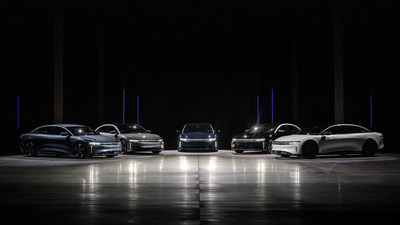 Lucid Air Pure and Air Touring will make their public debut the same week at the company's and at CDN Designer Night, taking their place in the Air lineup alongside Lucid Air Grand Touring, the 1050-hp Air Grand Touring Performance, and the recently debuted ultra-high-performance Air Sapphire, the world's most powerful sedan. Customers and fans can register to join the debut at dreamahead.com.

Air Pure, the elemental , has a starting price of and is distinguished by its metal roof and Mojave PurLux interior. Air Pure will initially launch with a dual-motor, all-wheel-drive configuration, with full specs including EPA-estimated range and additional details on the model to be shared on .

Lucid Air Touring, with an MSRP of $107,400, is the quintessential Air, featuring a fine balance of performance, luxury, design, and space. As such, it can be optioned with the unique Glass Canopy – a single piece of glass that reaches from the base of the windshield to over the heads of the front passengers for an unobstructed view, as well as DreamDrive Pro, Lucid’s advanced driver assistance system. Full specs and additional details for Lucid Air Touring will also be shared on November 15.

In addition to the online debut event for Lucid Air Pure and Air Touring, Lucid will be present at several events in and around to celebrate the entire Air lineup.

About
Lucid's mission is to inspire the adoption of sustainable energy by creating advanced technologies and the most captivating luxury electric vehicles centered around the human experience. The company's first car, , is a state-of-the-art luxury sedan with a -inspired design that features luxurious full-size interior space in a mid-size exterior footprint. Lucid Air Grand Touring features an official EPA-estimated 516 miles of range or 1,050 horsepower. Deliveries of , which is produced at Lucid's factory in , are currently underway to and Canadian customers.

This communication contains trademarks, service marks, trade names and copyrights of Lucid Group, Inc. and its subsidiaries and other companies, which are the property of their respective owners. 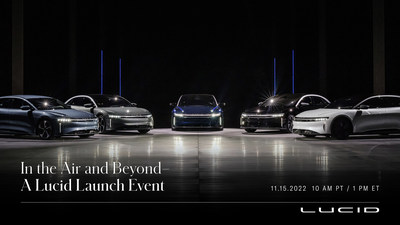